Whist
Whist is a classic English trick-taking card game which was played widely in the 18th and 19th centuries. It derives from the 16th game of Trump or Ruff, via Ruff and Honours. Although the rules are extremely simple, there is enormous scope for scientific play. From WIKI

In the Summer
this puts the section from Page 327 to 330 as a flashforward to some summer in the future. In the Journal there is a meeting of the commissioners at Christiana Bridge to recognize M&Ds work on the Tangent Line on November 21-25, 1764. I wouldn't call November Summer, though.

Juniata
The Juniata River is a tributary of the Susquehanna River, approximately 90 miles (145 km) long, in central Pennsylvania in the United States. The river is considered scenic along much of its route, having a broad and shallow course passing through several mountain ridges and steeply-lined water gaps. It formed an early 18th-century frontier region in Pennsylvania and was the site of Native American attacks against white settlements during the French and Indian War. From WIKI

Proprietarian politics... Anti-Proprietarians
The British kings repeatedly granted territory to an individual or a small group, rather than to a chartered company. These men, called proprietors, or sometimes "Lords Proprietors", were invested not only with property under private law but also with gubernatorial authority to administer it with extraordinary authority, somewhat recalling the earl palatine before the Glorious Revolution. The method was most notably used during the early colonization along the Atlantic coasts of North America and the Caribbean by Great Britain. A good example is the Province of Pennsylvania, granted to William Penn (the state still bears the name meaning "woodlands of Penn") by King Charles II of England. This type of indirect rule eventually fell out of favor as the English Sovereigns sought to concentrate their power and authority, and the colonies were converted to crown colonies, i.e. governed by officials appointed by the King. From WIKI

Field of Duck-Green, not to mention reliable Magenta
This combined color motif of bright green and magenta comes up several times in Inherent Vice and also appears on the dust jacket of the book. Indeed Pynchon works this visual gag into almost every novel, with numerous mentions in GR - see 'Magenta and Green', GRwiki.

Sugar-Islands
The exploitation of the Caribbean landscape dates back to the Spanish conquistadors around 1600 who mined the islands for gold which they brought back to Spain. The more significant development came when Christopher Columbus wrote back to Spain that the islands were made for sugar development. The history of Caribbean agricultural dependency is closely linked with European colonialism which altered the financial potential of the region by introducing a plantation system. Much like the Spanish enslaved indigenous Indians to work in gold mines, the seventeenth brought a new series of oppressors in the form of the Dutch, the English, and the French. By the middle of the eighteenth century sugar was Britain's largest import which made the Caribbean that much more important as a colony. The “New World” plantations were established in order to fulfill the growing needs of the “Old World”. The sugar plantations were built with the intention of exporting the sugar back to Britain which is why the British did not need to stimulate local demand for the sugar with wages. A system of slavery was adapted since it allowed the colonizer to have an abundant work force with little worry about declining demands for sugar. From WIKI

"A sweetness of immorality and corruption."
This conspiratorial talking about sugar boycotts makes me think that the events of these pages are happening after the Sugar Act of April 5, 1764.

Macaronic profession
Acting like a 'macaroni', a man whose principal interest in life is to be fashionable - as in the song 'Yankee Doodle'; 'He stuck a feather in his cap / And called it macaroni'. (A macaronic - noun not adjective - is a song in more than one language, found in GR with this usage incorrectly spelled as 'macronic'.)

Topick of Virtual Representation
In the early stages of the American Revolution, colonists in North America followed rules imposed upon them by the British Parliament because the colonies were not represented in Parliament. According to the British constitution, colonists argued, taxes could only be levied on British subjects with their consent. Because the colonists were represented only in their provincial assemblies, they said, only those legislatures could levy taxes in the colonies. This concept was famously expressed as "No taxation without representation." From WIKI 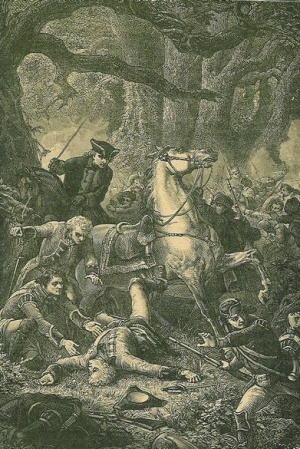 Braddock's Defeat
Fort Pitt was a fort in what is now the city of Pittsburgh, Allegheny County, Pennsylvania. The fort was built in 1758 during the French and Indian War, next to the site of Fort Duquesne. The French built Fort Duquesne in 1754, at the beginning of that war, and it became a focal point due to its strategic river location. The Braddock expedition, a 1755 attempt to take Fort Duquesne, met with a bloody repulse at the Monongahela River. The French garrison viciously mauled an attacking British regiment in September 1758, but abandoned and destroyed the fort at the approach of General John Forbes's expedition in November. From WIKI

Sun, January 8, 1764
from the journal: "Fixed on the house of Mr. John Harland's (about 31 miles West of Philadelphia) to bring our instruments to."
However, it appears that they actually returned to Philadelphia on the 9th to get the observatory and tools and then returned to the Harlands on the 14th where they "set up the sector in his Garden (inclosed in a tent), and in the Evening brought the Instruments into the Meridian, and took the following observations..."


setting up their observatory at John Harland's farm
See the LINK

Alexander Bryant's farm
Listed as Alexander Bryan in the Journal and all historical records. See this LINK for much more info pertaining to M&D around this time.

"Middle Point"
Mason and Dixon confirmed earlier survey work which delineated Delaware's southern boundary from the Atlantic Ocean to the ”Middle Point” stone (along what is today known as the Transpeninsular Line). They proceeded nearly due north from this to the Pennsylvania border. From WIKI

the younger William Penn
William Penn (October 14, 1644 – July 30, 1718) was an English founder and "Absolute Proprietor" of the Province of Pennsylvania, the English North American colony and the future U.S. State of Pennsylvania. He was known as an early champion of democracy and religious freedom and famous for his good relations and his treaties with the Lenape Indians. Under his direction, Philadelphia was planned and developed. From WIKI

Fermat's Last Theorem
In 1636, Fermat claimed--but never offered--a clever proof to a seemingly obvious math theorem. The theorem notes that squared numbers can be created by adding two other squares, as in the Pythagorean right-angled tringle 25 (5x5) = 16 (4x4) + 9 (3x3). The theorem states that this cannot be done with any power higher than 2. "The fact that the problem's statement is understandable by schoolchildren makes it all the more frustrating, and it has probably generated more incorrect proofs than any other problem in the history of mathematics. No correct proof was found for 357 years, when a proof was finally published by Andrew Wiles in 1994" -- Wikipedia.

the dead Hand of the second James
"James II of England (also known as James VII of Scotland; 14 October 1633 – 16 September 1701) became King of England, King of Scots, and King of Ireland on 6 February 1685, and Duke of Normandy on 31 December 1660. He was the last Roman Catholic monarch to reign over the Kingdom of Scotland, Kingdom of England, and Kingdom of Ireland. Many of his subjects distrusted his religious policies and supposed despotism, leading a group of them to depose him in the Glorious Revolution. He was replaced not by his Roman Catholic son, James Francis Edward, but by his Protestant daughter and son-in-law, Mary II and William III, who became joint rulers in 1689. The belief that James — not William III or Mary II — was the legitimate ruler became known as Jacobitism (from Jacobus or Iacobus, Latin for James)" -- Wikipedia

the other Fictions that govern'd that unhappy Monarch's Life
Are the fictions Jacobitism and Catholicism (per the Rev. Cherrycoke's POV)?

acufloral Meditations
Acufloral is treatment (think acupressure) using floral essences on specific meridian points- however, I am going to gather that here, Pynchon is alluding to Tenebrae's stitching of a floral pattern using pins (ie. acupuncture-like).

Fescue
A pointer, used for lessons with children.

Is this a purposeful hearkening of the sexual tensions related to the Fescue on pages 92-93?

Head of Elk
Refers to the head of Maryland's Elk River. It flows through Cecil County and into Chesapeake Bay in the NE corner of Maryland just west of the Delaware border. Head of Elk was of strategic significance in the Revolutionary War: MORE

Also, the town of Elkton, a town in Cecil County, Maryland, United States... It was formerly called Head of Elk because it is located at the head of navigation on the Elk River, which flows into the nearby Chesapeake Bay. From WIKI

Ridotto
A gathering for music and dancing, often in masquerade, popular in 18th century England.

waking each glaucous Dawn into sweat and stillness
Glaucous describes color: a green that has been dulled bluish and grayish. Botanically, it describes green vegetation, dulled with powdery bloom.

Catterick
Catterick, sometimes Catterick Village to distinguish it from the nearby Catterick Garrison, is a village in North Yorkshire. It dates back to Roman times, when Cataractonium was a Roman fort protecting the crossing of the Great North Road and Dere Street over the River Swale. From WIKI

Binchester
Binchester Roman Fort (called Vinovia by the Romans) is situated just over 1 mile (1.6 km) to the north of the town of Bishop Auckland on the banks of the River Wear in County Durham, England. The fort was the site of a hamlet until the late middle-ages, but the modern-day village of Binchester is about 2 miles (3 km) to the east, near Spennymoor. The fort was established to guard the crossing of the River Wear by Dere Street, the main Roman road between York, Hadrian's Wall and Scotland, and also the fort's via principalis. It was the largest Roman fort in County Durham, but only a relatively small part of its centre has been excavated and is open to the public. From WIKI

Lanchester
Longovicium (or Lanchester Roman Fort) was an auxiliary castra on Dere Street, in the Roman province of Britannia Inferior (Upper Britain - The Romans judged distances by proximity to Rome, therefore north England is inferior as it is farther away). Its ruins are located at Lanchester in the English county of Durham, roughly 8 miles (13 km) to the west of the city of Durham and 5 miles (8 km) from Consett. From WIKI

we must stand in Glaur of uncertain Depth
Glaur: "liquid mud of the filthiest sort" -- Northumbld. Gloss, 1893 (per OED); lowland Scots for mud. "A fool with his eyes in the glaur" (p. 229) is a Pynchonian way of saying "A man of little foresight."

In August they finally go chaining past the eighty-one-mile mark...
happens on August 25, 1764.