Draco coils around the north celestial pole, as depicted in Urania's Mirror, a set of constellation cards published in London c.1825
Draco is among the earliest of the constellations to have been defined; in one of the oldest known astronomical records, the ancient Egyptians identified it as Tawaret, the goddess of the northern sky in their pantheon of deities. Considered ever-vigilant because the constellation never set, she was depicted a fierce protective goddess whose body was a composite of crocodile, human, lioness, and hippopotamus parts. The Greeks named it Draco the dragon. From WIKI

Lambton Worm
The Lambton Worm is a legend from the North East of England in the UK. The story is one of the area's most famous pieces of folklore, having been adapted from written and oral tradition into pantomime and song formats. From WIKI

Lambton Castle
Lambton Castle, located in County Durham, England, between the towns of Washington and Chester-le-Street, is a stately home, the ancestral seat of the Lambton family, the Earls of Durham. From WIKI

Cockfield
Cockfield is a village on the edge of Teesdale, County Durham, in England. It is situated a few miles to the south-west of Bishop Auckland. Remains found on Cockfield Fell suggest there was a settlement in the area in the Iron Age. The parish church, dedicated to St Mary the Virgin, probably dates from the late 12th century. Coal mining began in the area in the medieval period. From WIKI Also, see page 504. 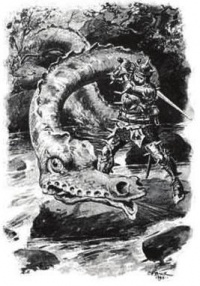 Illustration of John Lambton battling the Worm
The story revolves around John Lambton, an heir of the Lambton Estate, County Durham, and his battle with a giant worm which had been terrorising the local villages. As with most myths, details of the story change with each telling. From WIKI

Lamprey
A lamprey (sometimes also called lamprey eel) is a parasitic marine animal with a toothed, funnel-like sucking mouth. Translated directly, their name means stone lickers (lambere = to lick, and petra = stone). While lampreys are well known for those species which bore into the flesh of other fish to suck their blood, these species make up the minority. In zoology, lampreys are often not considered to be true fish because of their vastly different morphology and physiology. From WIKI

Abdul
Abdul (Arabic: عبد ال ‎), (also transliterated Abdel, `Abd al- (Arabic: عبد ال ‎), and other ways) is a phrase composed of the word عبد (Abd: servant or slave) and ال (Al: , the prefix meaning "the"); it means "slave/servant of the". The phrase appears as a component of many Arabic and specifically Muslim names, where it is the opening of religiously based names meaning servant of God, where the last component of the name is a name for God, such as "The Creator" etc. The term is combined with one of the Names of God in the Qur'an to form a Muslim Arabic theophoric name. Common examples are Abdul Aziz (Servant of the Almighty), Abdul Rahman (Servant of the Benevolent), and Abdul Rahim (Servant of the Merciful). The name "Abdul Masīh" (عبد المسيح), meaning "servant of the Messiah" is an Arabic Christian equivalent. From WIKI

inviolable
In religion and ethics, inviolability or sanctity of life is a principle of implied protection regarding aspects of sentient life which are said to be holy, sanctified, or otherwise of such value that they are not to be violated. In western religions, the concept is based on the belief that all human beings have souls or are created in God's image. The concept of inviolability is an important tie between the ethics of religion and the ethics of law, as each seeks justification for its principles as based on both purity and natural concept, as well as in universality of application. From WIKI

Trebuchet
A trebuchet or trebucket is a siege engine that was employed in the Middle Ages either to smash masonry walls or to throw projectiles over them. From WIKI

Cardinal Caesarini
Julian (Giuliano) Cesarini (Rome 1398 – Varna, Bulgaria, 10 November 1444) was one of the group of brilliant cardinals created by Pope Martin V on the conclusion of the Western Schism. His intellect and diplomacy made him a powerful agent first of the Council of Basel and then, after he broke with the Consiliar movement at Basel, of Papal superiority against the Conciliar movement. The French bishop Bossuet described Cesarini as the strongest bulwark that the Catholics could oppose to the Greeks in the Council of Florence. From WIKI

Truce of Szeged
The Treaty of Edirne and the Peace of Szeged were two halves of a peace treaty between Sultan Murad II of the Ottoman Empire and King Vladislaus of the Kingdom of Hungary. Despot Đurađ Branković of the Serbian Despotate also had a large role in the proceedings. The ratification took place on August 15, 1444 in Várad, a few months before the end of the Crusade of Varna. The treaty was started in Edirne with discussions between Murad and Vladislaus' ambassador. Within a few days, it was sent to Szeged with Murad's ambassador, to be finalized and ratified by Vladislaus. Once it arrived, complications caused the negotiations to continue for several more days, and oaths were eventually given in Várad. From WIKI

battle of Varna
The Battle of Varna took place on November 10, 1444 near Varna in eastern Bulgaria. In this battle the Ottoman Empire under Sultan Murad II defeated the Polish and Hungarian armies under Władysław III of Poland and János Hunyadi. It was the final battle of the Crusade of Varna. From WIKI

Sibyl
The word sibyl probably comes (via Latin) from the Greek word sibylla, meaning prophetess. The earliest oracular seeresses known as the sibyls of antiquity, "who admittedly are known only through legend" prophesied at certain holy sites, under the divine influence of a deity, originally— at Delphi and Pessinos— one of the chthonic earth-goddesses. Later in antiquity, sibyls wandered from place to place. From WIKI

Roumanian
Romanian (Archaic: Roumanian, Rumanian; Romanian: Român) refers to something of or relating to Romania, a country in southeastern Europe, the Romanian people, or the Romanian language. From WIKI

if God should allow him victory over the Worm, he would sacrifice unto Him the first living thing he then happen'd to see
Biblical allusion. In Judges 11, Jephthah vowes to sacrifice whoever first comes into his house, should God grant him victory over the Ammonites. It is actually Jephthah's daughter, and the sacrifice is accomplished. Interpretations disagree though on whether "sacrifice" has to be taken literally. Biblical Correspondance to Lord Lambton's Oath

Washington
Washington is a town in Tyne and Wear, England. Historically part of County Durham, it joined a new county in 1974 with the creation of Tyne and Wear. Washington is located geographically at an equal distance from the centres of Newcastle, Durham and Sunderland, hence it has close ties to all three cities. From WIKI

Chester-Le-Street
Chester-le-Street is a town in County Durham, England. It has a history going back to Roman times when it was called Concangis. The town is located 7 miles south of Newcastle upon Tyne and 8 miles west of Sunderland on the River Wear. The Parish Church of St Mary and St Cuthbert is where the body of St Cuthbert was laid to rest for some 113 years before being transferred to Durham Cathedral, and is the site of the first translation of the Bible into English, Aldred writing the Old English gloss between the lines of the Lindisfarne Gospels there. From WIKI

Dogger Bank
Dogger Bank (from dogge, an old Dutch word for fishing boat) is a large sandbank in a shallow area of the North Sea about 62 mi off the east coast of England. It extends over approximately 6,800 sq mi, with its maximum dimensions being about 162 mi from north to south and 59 mi from east to west. The water depth ranges from 49–120 ft, about 66 ft shallower than the surrounding sea. From WIKI

Oliphant
Olifant and its variations (ex. oliphant, olyphant) are archaic spellings of elephant. The word has been used to refer to ivory, elephant tusks, musical horns made of elephant tusks, or a musical instrument resembling such horns. From WIKI

Vambraces
Vambraces (French language avant-bras, sometimes known as lower cannons in the Middle Ages) are "tubular" or "gutter" defences for the forearm, developed first in the ancient world by the Romans, but only formally named during the early 14th century, as part of a suit of plate armour. They were made of either leather, sometimes reinforced with longitudinal strips of hardened hide or metal (a crafting method named "splinted armour"), or from a single piece of worked steel and worn with other pieces of armour. Vambraces are generally called forearm guards, with or without separate couters. From WIKI

ninth Lord... Henry Lambton
This curse seems to have held true for at least three generations, possibly helping to contribute to the popularity of the story.


(General Lambton, Henry Lambton's brother, is said to have kept a horse whip by his bedside to ward off violent assaults. He died in his bed at an old age.) from WIKI

Stukeleyesque
William Stukeley FRS, FRCP, FSA (7 November 1687 – 3 March 1765) was an English antiquary who pioneered the archaeological investigation of Stonehenge and Avebury and was one of the founders of field archaeology. Stukeley also was one of the first biographers of Isaac Newton. From WIKI

the Serpent-mound which is at Avebury
See page 440.

Pliny
First reference to the historical Pliny (not one of the twins listening to Wicks): Gaius Plinius Secundus (AD 23 – August 25, 79), better known as Pliny the Elder, was an author, naturalist, and natural philosopher as well as naval and army commander of the early Roman Empire and personal friend of the emperor Vespasian. Spending most of his spare time studying, writing or investigating natural and geographic phenomena in the field, he wrote an encyclopedic work, Naturalis Historia, which became a model for all such works written subsequently. From WIKI

Scotismus
Scotism is the name given to the philosophical and theological system or school named after John Duns Scotus. Scotism developed out of the Old Franciscan School, which dominated theology during the Middle Ages. This school of thought initially followed Augustinism which dominated theology at the time. Scotus found the ground already cleared for the conflict with the followers of Aquinas. He made very free use of Aristotelianism, but in its employment exercised sharp criticism, and in important points adhered to the teaching of the Older Franciscan School – especially with regard to the plurality of forms or of souls, the spiritual matter of the angels and of souls, etc., wherein he energetically combatted Aquinas. Scotism, or what is known as the Later Franciscan School, is thus only a continuation or further development of the older school, with a much wider, although not exclusive acceptance of Peripatetic ideas. Concerning the relation of these schools to each other, or the relation of Scotus to Alexander of Hales and St. Bonaventure, consult the work of the Flemish Recollect, Mathias Hauzeur. From WIKI