Grist-millers
A gristmill or grist mill is a building in which grain is ground into flour, or the grinding mechanism itself. In many countries these are referred to as corn mills or flour mills. From WIKI

"Mound"
Mounds were used for burial, to support residential and religious structures, to represent a shared cosmology, and to unite and demarcate community. Common forms include conical mounds, ridge-top mounds, platform mounds, and animal effigy mounds, but there are many variations. Mound building in the USA is believed to date back to at least 3400 BC in the Southeast (see Watson Brake). The Adena and Mississippian cultures are principally known for their mounds. The largest mound site north of Mexico is Cahokia, a vast World Heritage Site located just east of St. Louis, Missouri. The most visually impressive mound site (due to the area being free of trees) is in Moundville, Alabama. The largest conical burial mound can be found in Moundsville, West Virginia. From WIKI

Silbury Hill
Silbury Hill is a man-made chalk mound near Avebury in the English county of Wiltshire. At 130 ft high, Silbury Hill – which is part of the complex of Neolithic monuments around Avebury, which includes the Avebury Ring and West Kennet Long Barrow – is the tallest prehistoric human-made mound in Europe and one of the largest in the world; it is similar in size to some of the smaller Egyptian pyramids of the Giza Necropolis. Its purpose however, is still highly debated. There are several other Neolithic monuments in the area, including Stonehenge. From WIKI

Promontory
A promontory is a prominent mass of land which overlooks lower lying land or a body of water (when it may be called a peninsula or headland). Most promontories are formed either from a hard ridge of rock that has resisted the erosive forces that have removed the softer rock to the sides of it, or are the high ground that remains between two river valleys where they form a confluence. Throughout history many forts and castles have been built upon promontories because of their natural defensive properties. From WIKI

The Turkish Spy
Letters Writ by a Turkish Spy was an eight-volume collection of articles ostensibly written by an Ottoman spy named "Mahmut". Authorities agree that the first volume of this work, published in Italian in Paris in 1684, was written by a Genoese political refugee, Giovanni Paolo Marana (1642-1693), and was not a translation from Arabic. The remainder has been attributed to several English authors, among them Dr. Robert Midgley and William Bradshaw; however, it is likely that Midgley merely edited the English translation, made by Bradshaw, of the original Italian manuscript. Daniel Defoe wrote A Continuation of the Letters Writ by a Turkish Spy in 1718. From WIKI

The Cymry
The Welsh people (Welsh: Cymry) are an ethnic group and nation associated with Wales and the Welsh language. From WIKI

Babylon
All that remains of the original ancient famed city of Babylon today is a mound, or tell, of broken mud-brick buildings and debris in the fertile Mesopotamian plain between the Tigris and Euphrates rivers, in Iraq. Although it has been reconstructed, historical resources inform us that Babylon was at first a small town, that had sprung up by the beginning of the third millennium BCE (the dawn of the dynasties). The town flourished and attained prominence and political repute with the rise of the First Babylonian Dynasty. It was the "holy city" of Babylonia by approximately 2300 BCE, and the seat of the Neo-Babylonian Empire from 612 BCE. The Hanging Gardens of Babylon were one of the Seven Wonders of the Ancient World. From WIKI

Nineveh
Ancient Nineveh's mound-ruins of Kouyunjik and Nabī Yūnus are located on a level part of the plain near the junction of the Tigris and the Khosr Rivers within an 1,800-acre (7 km2) area circumscribed by a 12-kilometre (7.5 mi) brick rampart. This whole extensive space is now one immense area of ruins overlaid in parts by new suburbs of the city of Mosul. Nineveh was an important junction for commercial routes crossing the Tigris. Occupying a central position on the great highway between the Mediterranean Sea and the Indian Ocean, thus uniting the East and the West, wealth flowed into it from many sources, so that it became one of the greatest of all the region's ancient cities. From WIKI

Hu Gadarn the Mighty
Hu Gadarn ("Hu the Mighty") is supposedly a figure from Welsh mythology. He is said to have brought the Welsh to Britain from the Summer Country (Gwlad Yr Haf), also called Deffrobani (a medieval name for Ceylon, and sometimes called Atlantia (in modern neo-druidism)), taught them to plough, and invented song to strengthen memory and record. His oxen pulled the afanc, a water-dwelling monster, from a lake, preventing floods. From WIKI

Sideling Hill
Sideling Hill is part of the Allegheny Mountains of the Appalachian Mountain Range (also considered part of the Ridge-and-valley Appalachians). It traverses West Virginia, Maryland and Pennsylvania and rises to its highest elevation of 2,301 feet (616 m) in Fulton County, Pennsylvania. From WIKI

Shippensburg
Shippensburg is the oldest community of the Cumberland Valley, and the second oldest west of the Susquehanna River in Pennsylvania (after York to the southeast). In July 1730, 12 Scots-Irish families came to the site of the present day Shippensburg and built cabin homes along Burd's Run. Shippensburg began as the western outpost of colonial settlement. The village received its name from Edward Shippen, a prominent resident of Lancaster (and one time mayor of Philadelphia) who obtained the patent to the land from the heirs of William Penn. Edward Shippen's granddaughter, Peggy Shippen, was historically notable as the wife of General Benedict Arnold, who infamously betrayed the Continental Army by defecting to the British during the American Revolutionary War. In 1735, Samuel Perry built the Widow Piper's Tavern, which stands at the southwest corner of East King Street and Queen Street. This building was selected as the place for the first Cumberland County Courts in 1750 and 1751. The building has been restored and serves today as the home of the Shippensburg Civic Club. From WIKI

medicine in China
Traditional Chinese Medicine, also known as TCM, includes a range of traditional medical practices originating in China. Although well accepted in the mainstream of medical care throughout East Asia, it is considered an alternative medical system in much of the western world. TCM practices include such treatments as herbal medicine, acupuncture, dietary therapy, and both Tui na and Shiatsu massage. Qigong and Taijiquan are also closely associated with TCM. TCM claims to be rooted in meticulous observation of nature, the cosmos, and the human body, and to be thousands of years old. Major theories include those of Yin-yang, the Five Phases, the human body Channel system, Zang Fu organ theory, six confirmations, four layers, etc. From WIKI

Flow of Chee
In traditional Chinese culture, Chi is an active principle forming part of any living thing. It is frequently translated as "energy flow," and is often compared to Western notions of energeia or élan vital (vitalism) as well as the yogic notion of prana. The literal translation is "air," "breath," or "gas" (compare the original meaning of Latin spiritus "breathing"; or the Common Greek πνεῦμα, meaning "air," "breath," or "spirit"; and the Sanskrit term prana, "breath"). From WIKI

"An Inner Surface? Are you by chance seeking analogy between the Human Body and the planet Earth? The Earth has no inner Surface, Dixon."
Dixon is positing a Hollow Earth theory. See p.548.

Cloud-berry Flip
A Flip is a class of mixed drinks. According to the Oxford English Dictionary, the term was first used in 1695 to describe a mixture of beer, rum, and sugar, heated with a red-hot iron ("Thus we live at sea; eat biscuit, and drink flip"). The iron would cause the drink to froth up, and it is from this frothing (or "flipping") that the name was born. Over time, the proportion of eggs and sugar would increase, the beer would be gradually be left out, and the drink would cease to be served hot. From WIKI 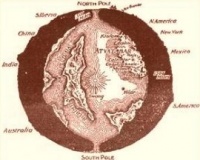 Map of a Hollow Earth (from The Goddess of Atvatabar (1892))

"...the Visitor's tales of a great dark Cavity up there, mirror'd overhead, as by a Water-sky,— Funnel-shap'd, leading inside the Earth...to another World."
Stig continues with tales of the Hollow Earth...

Wise Men from the East... ev'ryone knows they come in Threes!
The supposed "three" wise men from Jesus' birth narrative comes from the three gifts given to baby Jesus, ie. Gold, Frankincense & Myrrh. Nowhere does the story specify the number of wise men.

Thirteenth Guest
There were thirteen participants at the Last Supper. Tradition states that Judas Iscariot, the disciple who betrayed Jesus, was the 13th to sit at the table. From WIKI

Dog... for its Eyes glow as if all the Creature's Interior be a miniature of Hell
Cf. page 494.