the Adonis
The allusion to extreme physical attractiveness is apparent in the psychoanalytical Adonis Complex which refers to a body image obsession with improving one's physique and youthful appearance. From WIKI

Market-place Drolls
Drolls are short comical sketches that originated during the Puritan Interregnum in England. With the closure of the theatres, actors were left without any way of plying their art. Borrowing scenes from well-known plays of the Elizabethan theatre, they added dancing and other entertainments and performed these, sometimes illegally, to make money. From WIKI

The Restless Bee
a block and a half from where they are staying...must been near New Market...

Susurrus
A whispering, rustling, murmuring sound - an example of onomatapoea.

'At Lancaster,-day before yesterday...
this puts the date of this section in question. The Massacre occured on Tuesday December 27, 1763, which would make the date of the page December 29th. However, Dixon says its "odd for Wednesday market" that it would be so quiet. This suggests Wednesday, December 28th as the correct day for this passage.

Lancaster County, known as the Garden Spot of America, is a county located in the south-central part of the Commonwealth of Pennsylvania, in the United States... The fourteen survivors of the tribe were placed in protective custody in the county workhouse, but the Paxton Boys returned on December 27, broke into the workhouse, and butchered the remaining Susquehannocks. The widespread sympathy in the frontier counties for the perpetrators of these acts made their discovery and arrest futile. From WIKI

Revd. Stewart
John Stewart (1786-1823) was a missionary to the Wyandot Indians of Ohio and founder of what is often considered the first Methodist mission in America. Stewart was born in Powhatan County, Virginia to free Negro parents who were of mixed ancestry; a mix of white, black, and Indian. From WIKI

fuliginous
Fuliginous refers to a sooty, obscure or murky color (Merriam-Webster). As used by the author Gene Wolf in his books involving Severian the torturer, who wears a fuligin cape, the word refers to a color darker than black. 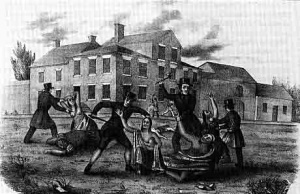 Moravian Brethren
The Moravian Church is a mainline Protestant denomination. Its religious heritage began in Kunvald late 14th century Bohemia (modern Czech Republic). Its official name is Unitas Fratrum meaning Unity of the Brethren (not to be confused with the small Unity of the Brethren church based in Texas). It is also occasionally referred to as the Bohemian Brethren. It places a high premium on Christian unity, personal piety, missions and music. The church's emblem is the Lamb of God with the flag of victory, surrounded by the Latin inscription: Vicit agnus noster, eum sequamur; or in English: "Our Lamb has conquered, let us follow Him." From WIKI

Time of Bushy Run
The Battle of Bushy Run occurred on August 5-6, 1763, in western Pennsylvania, between a British relief column under the command of Colonel Henry Bouquet and a combined force of Delaware, Shawnee, Mingo, and Huron warriors during Pontiac's Rebellion, 1763-65. From WIKI

General Gage
Thomas Gage (1719 – April 2, 1787) was a British general, best known for his role in the early days of the American Revolution... From 1763 to 1775 he served as commander in chief of the North American forces, including the direction of the British response to the 1763 Pontiac's Rebellion. In 1774 he was also appointed the military governor of the Province of Massachusetts Bay, where his actions played a role in sparking of the American Revolutionary War in April 1775. After his failure to resolve the Siege of Boston he was replaced by General Howe in October 1775, and returned to England. From WIKI

Hospital Blankets us'd 'to convey the Small-pox to the Indians'...
As it turned out, officers at the besieged Fort Pitt had already attempted to do what Amherst and Bouquet were still discussing, apparently without having been ordered to do so by Amherst or Bouquet. During a parley at Fort Pitt on June 24, 1763, Ecuyer gave representatives of the besieging Delawares two blankets and a handkerchief that had been exposed to smallpox, hoping to spread the disease to the Natives in order to end the siege. William Trent, the militia commander, left records that clearly indicated that the purpose of giving the blankets was "to Convey the Smallpox to the Indians." From WIKI

Brown Besses
Brown Bess is a nickname of uncertain origin for the British Army's Land Pattern Musket and its derivatives. From WIKI

Mantua-Maker
A Mantua (from the French Manteuil ) is an article of women's clothing worn in the late seventeenth century and eighteenth century. Originally a loose gown, the later mantua was an overgown or robe typically worn over stays, stomacher and a co-ordinating petticoat. From WIKI

Peggy Shippen
Peggy Shippen, or Margaret Shippen (July 11, 1760 - August 24, 1804 or February 14, 1836), was the second wife of General Benedict Arnold (following Margaret Mansfield, who died in 1775)... When she was very young, she learned that she could get anything she wanted from her sister, Elizabeth, by throwing a tantrum. Either her mother or father would give in and allow her to have what she wanted. She used this to her advantage throughout her life. From WIKI

poor young Andre
John André (May 2, 1750 – October 2, 1780) was a British army officer hanged as a spy during the American Revolutionary War. This was due to an incident in which he assisted Benedict Arnold's attempted surrender of the fort at West Point, New York to the British Army... During Peggy Shippen's visits to her home, she met British Major John Andre, after the British took control of Philadelphia. They became good friends, some even say there were mild flirtations. When he left, he gave her a lock of his hair in a golden locket. From WIKI

Veins and Reins
"reins" is the French word for "kidneys," carried over into early modern English. "Reins (rànz) pl.n.: 1. The kidneys, loins, or lower back." http://www.answers.com/topic/reins

Hibernia
Hibernia is the Classical Latin name for the island of Ireland. The name Hibernia was taken from Greek geographical accounts. During his exploration of northwest Europe (circa 320 BC), Pytheas of Massilia called the island Ierne (written Ἰέρνη). In his book Geographia (circa 150 AD), Claudius Ptolemaeus called the island Iouernia (written Ἰουερνία). It is likely that the Romans saw a connection between these historical names and the Latin word hibernus meaning wintry. From WIKI

'Tis too cloudy for Obs tonight...
this happened the night of December 29, 1763, supporting the 29th as the date for page 302. "Wednesday Market" is a mistake on Dixon's part.

Forks of Brandywine
The tributaries (themselves, colloquially, forks) of Brandywine Creek drain the whole area, so it's a district.

Brandywine Hundred is that portion of New Castle County that lies north of the Christina River and east of Brandywine Creek, excepting that portion in the south included in Wilmington Hundred. Its northern boundary follows a portion of the 12 mile arc drawn around the town of New Castle. It was one of the original hundreds in Delaware created in 1682 and was named for Brandywine Creek that flows along its western boundary. When created it included some of the area now in the Wilmington Hundred, which was split off 1833. From WIKI

Harris's Ferry
John Harris, Sr., (1673 - December 1748) emigrated from Britain to America late in the 17th century... In 1733 he was granted the right to operate a ferry across the Susquehanna and for more than half a century "Harris's Ferry" was the funnel through which much of the Scottish, Irish and German migration trickled west. In the same year Harris acquired, through grants, two tracts of land adjacent to his ferry, totaling 800 acres. Today, the area has been developed into downtown Harrisburg. John Harris Sr. Had 7 sons and 2 daughters who spread out and whose descendants are spread through the US. From WIKI

Perfumes of Celebes
Sulawesi Toraja Kalossi (coffee) — Grown at high altitudes on the island of Sulawesi (formerly known as Celebes) in the middle of the Malay archipelago in Indonesia. Kalossi is the small town in central Sulawesi which serves as the collection point for the coffee and Toraja is the mountainous area in which the coffee is grown. Celebes exhibits a rich, full body, well-balanced acidity (slightly more than Sumatra) and is multi-dimensional in character. It has dark chocolate and ripe fruit undertones. It is an excellent coffee for darker roasting. Because of its semi-dry processing, it may roast a bit unevenly. From WIKI

Delphic Vapors
The priestess of the oracle at Delphi was known as the Pythia. Apollo spoke through his oracle, who had to be an older woman of blameless life chosen from among the peasants of the area. The sibyl or prophetess took the name Pythia and sat on a tripod seat over an opening in the earth. When Apollo slew Python, its body fell into this fissure, according to legend, and fumes arose from its decomposing body. Intoxicated by the vapors, the sibyl would fall into a trance, allowing Apollo to possess her spirit. In this state she prophesied. It has been postulated that a gas high in ethylene came out of this opening that is known to produce violent trances, though this theory remains debatable. While in a trance the Pythia "raved" - probably a form of ecstatic speech - and her ravings were "translated" by the priests of the temple into elegant hexameters. People consulted the Delphic oracle on everything from important matters of public policy to personal affairs. From WIKI

"...wi' nowt but Spoil-Heaps to look at"
An unlikely usage from Mason; 'nowt' and 'owt' are North-English parlance for 'nothing' and 'something', derived from 'naught' and 'aught'. But Mason is from Gloucestershire, too far south for it to be a natural part of his vocabulary. He may be mocking Dixon, but as a Geordie, Dixon would pronounce it 'noot'.

front of the Arras
a wall-hanging, as in the one behind which Polonius hides in Act III, Scene IV of Hamlet. Thinking it to be his stepfather, saying, "How now? a rat?", Hamlet fatally stabs him, through the arras.

hydraulick Looms
See Pynchon's essay Is it O.K. to be a Luddite for more on this topic.

expell'd from Paradise by Wolfe and his Regiment
See Wolfe, James