Zeno's Paradox
Zeno of Elea (ca. 490 BC? – ca. 430 BC?) was a pre-Socratic Greek philosopher of southern Italy and a member of the Eleatic School founded by Parmenides. Aristotle called him the inventor of the dialectic. He is best known for his paradoxes, which Betrand Russell has described as "immeasurably subtle and profound"... This seems to be a reference to the paradox of Achilles and the Tortoise: Achilles is in a footrace with the tortoise. Achilles allows the tortoise a head start of 100 metres. If we suppose that each racer starts running at some constant speed (one very fast and one very slow), then after some finite time, Achilles will have run 100 metres, bringing him to the tortoise's starting point. During this time, the tortoise has run a much shorter distance, say, 10 metres. It will then take Achilles some further time to run that distance, by which time the tortoise will have advanced farther; and then more time still to reach this third point, while the tortoise moves ahead. Thus, whenever Achilles reaches somewhere the tortoise has been, he still has farther to go. Therefore, because there are an infinite number of points Achilles must reach where the tortoise has already been, he can never overtake the tortoise. Of course, simple experience tells us that Achilles will be able to overtake the tortoise, which is why this is a paradox. From WIKI

Bourbon Court
The House of Bourbon is an important European royal house, a branch of the Capetian dynasty. Bourbon kings first ruled Navarre and France in the 16th century. By the 18th century, members of the Bourbon dynasty also held thrones in Spain, Naples & Sicily, and Parma. Spain and Luxembourg currently have Bourbon monarchs. From WIKI - Also, see page 377.

When they happen across an Adventurer from Mexico, and the ancient City he has discover'd beneath the Earth, where thousands of Mummies occupy the Streets...
Yet another reference to Hollow Earth theory. See p.548 - This also, takes it a bit further, as this seems intended to focus on the archaic idea of the Afterlife being Underground, and the fusion of Ancient Egyptian ideas (that one must be mummified to reach the Afterlife) as well as Ancient Hebrew (that when one dies they go to Sheol, a place underground). Also, see WIKI

The object was soon universally accepted as a new planet. By 1783, Herschel himself acknowledged this fact to Royal Society president Joseph Banks: "By the observation of the most eminent Astronomers in Europe it appears that the new star, which I had the honour of pointing out to them in March 1781, is a Primary Planet of our Solar System." In recognition of his achievement, King George III gave Herschel an annual stipend of £200 on the condition that he move to Windsor so that the Royal Family could have a chance to look through his telescopes. From WIKI

Mug's Game
A foolish, profitless, or hopeless undertaking. From WIKI

Copley Medal
The Copley Medal is an award given by the Royal Society of London for "outstanding achievements in research in any branch of science, and alternates between the physical sciences and the biological sciences". Awarded every year, the medal is the oldest Royal Society medal still being awarded, having first been given in 1731 to Stephen Gray, who received it for "his new Electrical Experiments: - as an encouragement to him for the readiness he has always shown in obliging the Society with his discoveries and improvements in this part of Natural Knowledge". The medal was created following a donation of £100 to be used for carrying out experiments by Sir Godgery Copley, for which the interest on the amount was used for several years. The conditions for the medal have been changed several of times; in 1736, it was suggested that "a medal or other honorary prize should be bestowed on the person whose experiment should be best approved", and this remained the rule until 1831, when the conditions were changed so that the medal would be awarded to the researcher that the Royal Society Council decided most deserved it. A second donation of £1666 13s. 4d. was made by Sir Joseph William Copley in 1881, and the interest from that amount is used to pay for the medal. The medal in its current format is made of silver gilt and awarded with a £5000 prize. From WIKI

Queen of Sheba
The Queen of Sheba was the woman who ruled the ancient kingdom of Sheba and is referred to in Habeshan history, the Hebrew Bible, the New Testament, and the Qur'an. The location of the historical kingdom may have included part or all of modern day Eritrea, Ethiopia, and Yemen... According to the Hebrew Bible, the unnamed queen of the land of Sheba heard of the great wisdom of King Solomon of Israel and journeyed there with gifts of spices, gold, precious stones, and beautiful wood and to test him with questions, as recorded in First Kings 10:1-13 (largely copied in 2 Chronicles 9:1–12). From WIKI

depredations
A raid or predatory attack. From WIKI 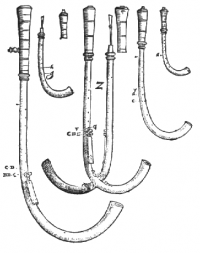 Crumhorns shown in the “Syntagma musicum” vol. 2 (1619)
(Literary) A whispering or rustling sound; a murmur. From WIKI

Crumhornes
The crumhorn is a musical instrument of the woodwind family, most commonly used during the Renaissance period... The name 'crumhorn' derives from the German Krumhorn (or Krummhorn or Krumphorn) meaning bent horn. This relates to the old English crump meaning curve, surviving in modern English in 'crumpled' and 'crumpet' (a curved cake)... The crumhorn is a capped reed instrument. Its construction is similar to that of the chanter of a bagpipe. A double reed is mounted inside a windcap at one end of a long pipe. Blowing into the windcap produces a musical note. The pitch of the note can be varied by opening or closing finger holes along the length of the pipe. One unusual feature of the crumhorn is its shape; the end is bent upwards in a curve resembling the letter 'J'. From WIKI

Swedesboro
Swedesboro, along with Bridgeport, was one of only two settlements established in New Jersey as a part of the New Sweden colony. The oldest extant log cabin in the United States, the Nothnagle Log Cabin was built by Antti Niilonpoika (Anthony Neilson/Nelson) in Swedesboro. It is a registered National historic site, as is Trinity Episcopal "Old Swedes" Church. Trinity was established as a Swedish Lutheran Church in 1703; the present building dates to 1784. From WIKI

Spanish Extremadura
Extremadura is an autonomous community of western Spain whose capital city is Mérida. It includes the provinces of Cáceres and Badajoz. Extremadura borders Portugal to the west, and it is an important area for wildlife, particularly with the major reserve at Monfragüe, which was designated a National Park in 2007, or the project of the International Tagus River Natural Park (Parque Natural Rio Tajo internacional). To the north it borders Castile and León (provinces of Salamanca and Ávila); to the south, it borders Andalusia (provinces of Huelva, Seville, and Córdoba); and to the east, it borders Castile-La Mancha (provinces of Toledo and Ciudad Real). From WIKI

1707 map of north-west Africa, showing the "fabled" island of San Borondón west of the Canaries, ie. St. Brendan's Isle
In non-American parts of the English speaking world a chandlery refers to a shop selling nautical items for ships and boats. This term is still in use. Also the job function and title, Chandler still exists as someone who works in the chandlery business or chandlery shop. Also, a chandlery was the office in a medieval household responsible for wax and candles, as well as the room in which the candles were kept. From WIKI

Greengrocers'
A greengrocer or fruiterer is a retail trader in fruit and vegetables; that is, in green groceries. Greengrocer is primarily a British and Australian term, and greengrocers' shops were once common in suburbs, towns and villages. From WIKI

ubiquitous
Ubiquity- The state or quality of being, or appearing to be, everywhere at once; actual or perceived omnipresence. From WIKI

transnoctially
Across the night; beyond the surface of dreams

"Atlantick Company"
Definitely seems to be a fictitious company here, however, this LINK is interesting to read, and relevant, though comes later in time.