cheese rolling refers to the cheese rolling at [1] as part of the annual Randwick Wap, not the more well known variety at Coopers Hill.

English Glory. England's Glory is a well known brand of matches, although latterly distributed widely they were originally a localized product manufactured in nearby Gloucester.

As gatherings of the People ... Distress among the Clothiers ... Light Cavalry
Refers to several violent revolts in England in the mid 18th century when traditional cloth weavers destroyed newer weaving machines, usually owned by clothes makers, as their livelihood was threatened. It's one of many "Luddite" references that run through Pynchon's books.

Aleppo
Aleppo, Syria. The western end of The Silk Road.

I do know that about his residences, but it is in his vision pervading ATD, for example. The real Chicago, Telluride, New York City. Remarks in GR....(if I should substantiate better, then take it out until I do). In an analogous way, a "Cartesian grid" is not a good thing in ATD, yet it is known that TRP wrote GR on engineeering grid paper. Also, he has a strong vision of the not-goodness of words on paper, of verbal "represeantions' of life in GR (and ATD, I think), yet he writes and gets published on paper. [ [User: MKOHUT, 5 March 2007]].

Bread & Wine, a kindness of the Almighty
Pynchon seeing the Eucharist as a 'kind' way of enacting the body and blood of Christ belief in Christianity. A wonderful trope.

Death or its ev'ryday Coercions...Death's thousand Metaphors
See this theme in Against the Day; all of the day's necessities that are against the simple living of life...all that is "against the day".

acted as a Lens, a moral refraction
Once again, light as metaphor, lenses and refraction ala ATD.

see them as they are
Only in death..in life, M & D and everyone struggles to see the heavenly bodies clearly. Nice.

Telluric secrets
telluric: adj. Of or relating to Earth; terrestrial. Derived from or containing tellurium, especially with valence 6. 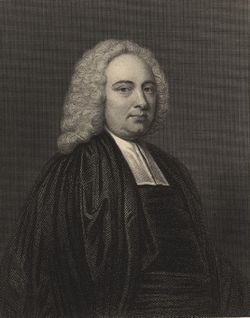 Dr. James Bradley
Bradley, Dr. James (1693-1762) - Astronomer Royal at the time a request for an English surveying team to determine the Pennsylvania/Maryland border was made. Bradley was the director of the the Greenwich Observatory. He recommended Charles Mason who had been his assistant observer from 1756 to 1760, working closely with Bradley on a catalogue of positions of the moon. In 1729 he published his discovery of the aberration of light, providing the first observational proof of the Copernican hypothesis that the Earth revolved around the Sun and not vice versa. Also, see Wikipedia entry.

Canary Coat
"His yellow jacket with red sleeves indicates that he is a 'canary', temporarily forced to wear this distinctive coat as a defaulter against Hospital rules (often for drunkenness).... the infliction of the 'canary' coat on pensioners as a punishment was abolished by Admiral Sir Thomas Masterman Hardy, during his Governorship of the Hospital in the 1830s."

St Helena was then transferred to this new United East India Company. The same year, extensive work began to build the present Castle. Because of a lack of cement, mud was used as the mortar for many buildings, most of which had deteriorated into a state of ruin. In a search for lime on the island, a soldier in 1709 claimed to have discovered gold and silver deposits in Breakneck Valley. For a short period, it is believed that almost every able-bodied man was employed in prospecting for these precious metals. The short-lived Breakneck Valley Gold Rush ended with the results of an assay of the deposits in London, showing that they were iron pyrites.