Cant
Cant is an example of an argot or cryptolect, a characteristic or secret language used only by members of a group, often used to conceal the meaning from those outside the group... The origin of the word cant itself has not been agreed upon. The word may be derived from the Irish word caint ("speech, talk"), or it may be from the English word "chant or Latin cantare. From WIKI

Shappo
A hat: corruption of CHAPEAU. Cant. Definition taken from The 1811 Dictionary of the Vulgar Tongue, originally by Francis Grose.

Punch's Voice
Punch is the name of the prince of puppets, the chief wit and support of a puppet-show. Definition taken from The 1811 Dictionary of the Vulgar Tongue, originally by Francis Grose. 'Punch and Judy' shows are popular seaside entertainment for children in the UK. Punch's screeching voice is achieved with a vibrating plectrum known as a 'swazzle', held in the teeth.

Metonymy
Metonymy is a figure of speech used in rhetoric in which a thing or concept is not called by its own name, but by the name of something intimately associated with that thing or concept. It comes from the Greek: μετωνυμία, metōnymía, "a change of name", from μετά, metá, "after, beyond" and -ωνυμία, -ōnymía, a suffix used to name figures of speech, from ὄνῠμα, ónyma or ὄνομα, ónoma, "name"[1] Metonymy may also be instructively contrasted with metaphor. Both figures involve the substitution of one term for another. In metaphor, this substitution is based on similarity, whereas, in metonymy, the substitution is based on contiguity. From WIKI

Sect having begun with a Hat
Quakers do not believe in removing their hat for anyone (this includes not tipping it, etc) except for God alone (during prayer, etc). This was found peculiar by others, as the usual custom was to remove your hat when around social superiors or leaders, indoors, etc.

his Soul's off God knows where
Mind-body dualism [1] and out-of-body travel. The mind-body dichotomy is the starting point of Dualism, and became conceptualized in the form as it is currently known in the Western world in René Descartes philosophy, but also appeared in pre-Aristotelian concepts. from Wikipedia.
Descartes is a philosopher whom Thomas Pynchon has expressed negativity about in other works. See Against the Day.

what, in thy Absence, is doing the Staring for thee?
The philosophical "problem" of self-consciousness? With the mind off elsewhere, what is looking out of the mind's eyes?

what Verger of the Temple of the Self...?
verg·er (vûrjr) NOUN: Chiefly British
One who carries the verge or other emblem of authority before a scholastic, legal, or religious dignitary in a procession.
One who takes care of the interior of a church and acts as an attendant during ceremonies. American Heritage Dictionary 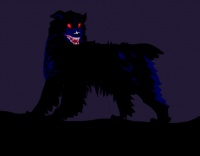 The ghostly Black Dog of British folklore
A black dog is the name given to a being found primarily in the folklores of the British Isles. The black dog is essentially a nocturnal Apparition, often said to be associated with the Devil, and its appearance was regarded as a portent of death. It is generally supposed to be larger than a normal dog, and often has large, glowing eyes. It is often associated with electrical storms (such as Black Shuck's appearance at Bungay, Suffolk), and also with crossroads, places of execution and ancient pathways. From WIKI

The Black Dog was Winston Churchill's name for the massive depression that sometimes took him over.

"of a certain farm animal?"
A pig of course, perhaps Pynchon's favorite animal [see V.and other works], which, along with the Black Dog, is one of the Things That Are Never Said... And counterpointed to the Names of the Holy Trinity, "names most likely to matter."

Sensorium
The term originally enters English from the Late Latin in the mid-17th century, from the stem sens- (see: sense). The term sensorium (plural: sensoria) refers to the sum of an organism's perception, the "seat of sensation" where it experiences and interprets the environments within which it lives... In earlier use it referred, in a broader sense, to the brain as the mind's organ (Oxford English Dictionary 1989). In medical, psychological, and physiological discourse it has come to refer to the total character of the unique and changing sensory environments perceived by individuals. These include the sensation, perception, and interpretation of information about the world by senses, perceptual systems and minds (MedTerms 2001). From Wikipedia

Philadelphia, where he has just been elected Dog-Catcher
Philadelphia is like Washington, D.C. at this time, where "rival packs of wild dogs" existed in Against the Day at a later time. Against the Day Dogs rule?
Another dog allusion which feeds the idea that "man's best friend" is almost like the humans in Pynchon's work.
"I'm a Dog Person"--Dixon, page 495

whim-wham
WHIM-WHAM- A word from around the 16th century from which the word Whimsical was derived.
A whimsical decorative object or device.
A fantastic creation of the brain or hand. whim-wham

Antietam
Antietam Creek is a tributary of the Potomac River located in south central Pennsylvania and western Maryland in the United States, a region known as Hagerstown Valley. The creek became famous as a focal point of the Battle of Antietam during the American Civil War. The term Antietam is thought to be a derivative of a Native American phrase meaning "swift flowing stream." From WIKI

Cavern beneath the Earth... "Ceilings! high as Heaven...."
A hallowed place? Notice how large the space becomes immediately after the entrance arch that is only 6 yards by four feet. Reminds one of the rooms that are larger inside than out. Perhaps "inner space" and hallowed underground spaces [lower than lowlands; depths that had "no names" in Gravity's Rainbow] contain-or could contain-much more than we think? See pages 354 & 412.

Pencil of Time
Compare knives of the seasons from GR.

tears of the Rocks
And what follows. All [the awareness of mortality] is even older than the Indians.
Cf. Rachel Owlglass in V., p. 20: "the dead rocks that were here before us and will be here after us."

Ogham
Ogham is an Early Medieval alphabet used primarily to represent the Old Irish language, and occasionally the Brythonic ancestor of Welsh. Ogham is sometimes referred to as the "Celtic Tree Alphabet", based on a High Medieval Bríatharogam tradition ascribing names of trees to the individual letters... There are roughly 400 surviving ogham inscriptions on stone monuments throughout Ireland and Britain, the bulk of them stretching in arc from County Kerry in the south of Ireland across to Dyfed in south Wales. The remainder are mostly in south-eastern Ireland, western Scotland, the Isle of Man, and England around the Devon/Cornwall border. The vast majority of the inscriptions consist of personal names. From WIKI

Welsh Indians
Madoc (Standard Welsh: Madog) ab Owain Gwynedd was, according to folklore, a Welsh prince who discovered America in 1170, over three hundred years before Christopher Columbus's voyage in 1492. Madoc's existence has been the subject of much speculation, though no historical or archaeological evidence of such a man or his voyages has been found in the New or Old World. Most modern historians believe the story of Madoc's American voyage originated with Queen Elizabeth I of England's advisors around 1580, as a ploy to assert prior discovery, and hence legal possession, of North America by England... A later development in the legend claimed the settlers were absorbed by groups of Native Americans and their descendants remained somewhere on the American frontier for hundreds of years. From WIKI

Painswick
Painswick is a small town in Gloucestershire, England. Originally, the town grew on the wool trade, but it is now best known for its church's yew trees and the local Rococo Garden. The town is mainly constructed of locally quarried Cotswold stone. Many of the buildings feature south-facing attic rooms once used as weaver's workshops. Geographically Painswick is situated on a hill in the Stroud district, overlooking the Stroud valleys. Its narrow streets and traditional architecture make it the epitome of an English village. From WIKI