"Ensign Cheer."
Is this Dixon making a sarcastic remark, implying Mason is being pessimistic or discouraging about his Fire-flies plans? 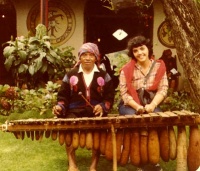 The marimba is a musical instrument in the percussion family. Keys or bars (usually made of wood) are struck with mallets to produce musical tones. The keys are arranged as those of a piano, with the accidentals raised vertically and overlapping the natural keys to aid the performer both visually and physically. From WIKI

"Pepinazos"
Anthem of the Expedition. There is a translation on ThomasPynchon.com, that translates this as "Blows", however, I think the translation of "Bangs" is a bit better (as pepinazo is closer to an explosion or loud blast from a cannon, etc). To me, "Blows" brings to mind punches which isnt in line with the word's meaning. I had other translation differences as well. That in mind, the lyrics in English may read something like:

Bangs, never
Hugs, If I
Want, Yes
For real
Listen!-
Let yourself be,
The Ba-a-nngg--ss!

Is the song a play off of "Tree Hugger"? As the Line progresses, it's Bangs not Hugs? The Ax-men's persistent Banging, the Bangs of guns and cannons past & future, the Bangs of their mallets? Also, maybe this was a tune influenced by the Lightning strikes a number of pages previous?

Codorus
Codorus Creek is a tributary of the Susquehanna River in York County, Pennsylvania in the United States. Codorus Creek (Native American for "rapid water"), formed by the confluence of the West and South branches approximately 0.8 miles (1.3 km) upstream of the Pennsylvania Route 182 crossing, flows for approximately 15.2 miles (24.5 km) to join the Susquehanna River near the community of Saginaw. From WIKI

Piney Run
Carroll County is bordered on the north by the Mason-Dixon Line. The Piney Run Reservoir is in the southern part of the county. From WIKI

Groat
Groat is the traditional name of an English silver coin worth four English pennies, and also a Scottish coin originally worth fourpence, with later issues being valued at eightpence and a shilling. From WIKI

"Bit steep, isn't i'...?"
Dixon is of course calling Mason harsh in accusing him of being his penalty, but his dropping of the t in "it" allows for an interpretation unintended by Dixon—that he is a steep penalty for Mason.

Kabbalists of the Second Century as Gematria
Gematria is a system of assigning numerical value to a word or phrase, in the belief that words or phrases with identical numerical values bear some relation to each other, or bear some relation to the number itself as it may apply to a person's age, the calendar year, or the like. The word "gematria" is generally held to derive from Greek geōmetriā, "geometry", which was used a translation of gēmaṭriyā, though some scholars believe it to derive from Greek grammateia, rather; it's possible that both words had an influence on the formation of the Hebrew word. It has been extant in English since the 17th century from translations of works by Giovanni Pico della Mirandola. Although ostensibly derived from Greek, it is largely used in Jewish texts of Tanakh and Talmud, notably in those associated with the Kabbalah... Many researchers connect the "Number of the Beast", referred to in the Book of Revelation of the New Testament, with either Greek or Hebrew Gematria as used by the early Christians. According to such interpretations, the number in question, 666, was originally derived via Gematria from the name of the Roman Emperor of the time, Nero. From WIKI

"simple son of the Pit"
Of course Dixon comes from Pitmens' (Miners) territory, and grew up while hanging at The Jolly Pitman, but also, this comment brings to mind Peter Redzinger's revelation through drowning in Hops. See page 359.

John Company
After a rival English company challenged its monopoly in the late 17th century, the two companies were merged in 1708 to form the United Company of Merchants of England Trading to the East Indies, commonly styled the Honourable East India Company, and abbreviated, HEIC; the Company was colloquially referred to as John Company. From WIKI

Sarong
Here used as a pun on 'so wrong', a sarong or sarung is a large tube or length of fabric, often wrapped around the waist and worn as a kilt by men and as a skirt by women throughout much of South Asia, Southeast Asia, the Arabian Peninsula, the Horn of Africa, and on many Pacific islands. From WIKI

Sari
Here used as a pun on 'sorry', a sari is a female garment in the Indian Subcontinent. A sari is a strip of unstitched cloth, ranging from four to nine metres in length that is draped over the body in various styles. The most common style is for the sari to be wrapped around the waist, with one end then draped over the shoulder baring the midriff. From WIKI 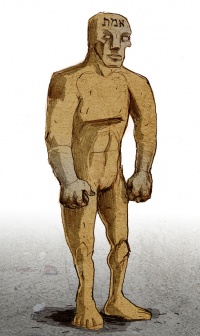 Illustration of a golem by Philippe Semeria

In Jewish folklore, a golem is an animated being created entirely from inanimate matter. In modern Hebrew the word golem literally means "cocoon", but can also mean "fool", "silly", or even "stupid". The name appears to derive from the word gelem (גלם), which means "raw material". Alternatively, some sources indicate that it is a corruption of the Hebrew go′al 'enu (גואלנו) our redeemer or our avenger... The earliest stories of golems date to early Judaism. Adam is described in the Talmud (Tractate Sanhedrin 38b) as initially created as a golem when his dust was "kneaded into a shapeless hunk". Like Adam, all golems are created from clay. They were a creation of those who were very holy and close to God. A very holy person was one who strove to approach God, and in that pursuit would gain some of God's wisdom and power. One of these powers was the creation of life. No matter how holy a person became, however, a being created by that person would be, but a shadow of one created by God... Owning and activating golems: Having a golem servant was seen as the ultimate symbol of wisdom and holiness, and there are many tales of golems connected to prominent rabbis throughout the Middle Ages. From WIKI

Germanickal Mystics
Wicks is surely writing about folks like Peter Redzinger here, German mystics in the New World, however, traditionally: German mysticism, sometimes called Dominican mysticism or Rhineland mysticism, was a late medieval Christian mystical movement, that was especially prominent within the Dominican order and in Germany. Although its origins can be traced back to Hildegard of Bingen, it is mostly represented by Meister Eckhart, Johannes Tauler, and Henry Suso. Other notable figures include Rulman Merswin and Margaretha Ebner, and the Friends of God. From WIKI

"Epsilons, usually. Miserable little... sort of things."
This exchange is a reference to mathematical analysis and the rigorous foundations of the calculus of limits. Typically epsilon denotes an arbitrary positive number which a certain quantity is shown to be smaller than, in order to show that this quantity is in fact zero. This allusion is anachronistic because this idea of a limit first appears only in the writings of Augustin Louis Cauchy in 1821, and was only formally stated by Karl Weierstrass some decades later. Any student of mathematics will no doubt fondly remember having to master the epsilon-delta argument.

Murmurs of "'Thus?'"
The same objection as to 'Emerson's notorious "therefore"' (p.224) - '... believing that there must have been some train of logic they fail'd to see.'

symmetry
Symmetry generally conveys two primary meanings. The first is an imprecise sense of harmonious or aesthetically pleasing proportionality and balance; such that it reflects beauty or perfection. The second meaning is a precise and well-defined concept of balance or "patterned self-similarity" that can be demonstrated or proved according to the rules of a formal system: by geometry, through physics or otherwise. From WIKI