"ev'ryone here has serv'd upon that Station"
See page 158.

Hampstead
Hampstead is an area of London, England, located 4 miles (6.4 km) north-west of Charing Cross. It is located within Inner London. It is part of the London Borough of Camden. It is known for its intellectual, artistic, musical and literary associations and for the large and hilly parkland Hampstead Heath. It is also home to some of the most expensive housing in the London area, or indeed anywhere in the world, with large houses regularly listed for sale at over twenty million pounds. The village of Hampstead has more millionaires within its boundaries than any other area of the United Kingdom. From WIKI

Ranelagh
Ranelagh Gardens were public pleasure gardens located in Chelsea, then just outside London, England in the eighteenth century, named after Ranelagh House, home of the Cole family, who took their title (Earls of Ranelagh) from the district in County Dublin. From WIKI

largely Paper Vengeance, he not only traverses...
Writing injustice largely on paper with that Pynchon word.....what reminds thee of?

Bolsters
A bolster (etymology: Middle English, derived from Old English, and before that the Germanic word bulgstraz) is a long narrow pillow or cushion filled with cotton, down, or fibre. From WIKI

Berm
A berm is a level space, shelf, or raised barrier separating two areas. Berm is a loanword from Dutch. From WIKI

gain'd the Mohawk
Mohawk meaning "eaters of men" (Kanienkeh, Kanienkehaka or Kanien’Kahake, meaning "People of the Flint") are an indigenous people of North America originally from the Mohawk Valley in upstate New York to southern Quebec and eastern Ontario. From WIKI 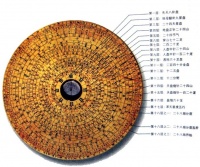 Luopan is a Chinese magnetic compass, also known as a Feng Shui compass. It is used by a Feng Shui consultant to determine the precise direction of a structure or other item. Since the invention of the compass for use in Feng Shui, traditional feng shui has required its use. From WIKI

Fort Stanwix
Fort Stanwix was a colonial fort whose construction was started on August 26, 1758, by British General John Stanwix, at the location of present-day Rome, New York, but was not completed until about 1762. The fort guarded a portage known as the Oneida Carrying Place during the French and Indian War. From WIKI

Johnson Castle
During the second and third quarters of the 18th century, most of the Mohawks in the Province of New York lived along the Mohawk River at Canajoharie, a few lived at Schoharie, while the rest lived about 30 miles downstream at the Ticonderoga Castle also called Fort Hunter. The two settlements were traditionally called the Upper Castle and the Lower Castle. The Lower Castle was almost contiguous with Sir Peter Warren's Warrensbush. Sir William Johnson built his first house on the north bank of the Mohawk River almost opposite Warrensbush. From WIKI - Also, see THIS

Irish Baronet
A baronet (traditional abbreviation Bart, modern abbreviation Bt) or the rare female equivalent, a baronetess (abbreviation Btss), is the holder of a hereditary title awarded by the British Crown known as a baronetcy. The current practice of awarding baronetcies was originally introduced in England and Ireland by James I of England in 1611 in order to raise funds. From WIKI

Metallick Plate
As it progressed, the expedition sought to strengthen France's claim to the territory by marking it at the mouths of principal tributaries. They did this by nailing a tin or copper plate bearing the French royal arms to a tree, and burying an inscribed leaden plate declaring the claims of France. This was a traditional European mode of marking territory, but it might have contributed to Native American anxieties about the intentions of the French, and thus ultimately had a counterproductive effect. From WIKI 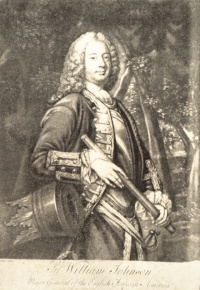 This mezzotint of William Johnson was published in London in 1756.
Sir William Johnson, 1st Baronet (c. 1715 – 11 July 1774) was an Irish-born official of the British Empire. As a young man, Johnson came to the Province of New York to manage an estate purchased by his uncle, Admiral Peter Warren, which was located amidst the Mohawks, one of the Six Nations of the Iroquois. Johnson learned the Mohawk language and became New York's agent to the Iroquois. Throughout his career as a British official among the Iroquois, Johnson combined personal business with official diplomacy, acquiring millions of acres of Native land and becoming very wealthy. Johnson commanded Iroquois and colonial militia forces during the French and Indian War. His role in the British victory at the Battle of Lake George in 1755 earned him a baronetcy; his capture of Fort Niagara from the French in 1759 brought him additional renown. In 1756, Johnson was commissioned as the superintendent of Indian affairs for the northern colonies. Serving in that role until his death, Johnson worked to keep American Indians attached to the British interest. From WIKI

Battle of Leuthen
In the Battle of Leuthen fought on 5 December 1757 Frederick the Great's Prussian army used maneuver and terrain to decisively defeat a much larger Austrian army under Charles of Lorraine, thus ensuring Prussian control of Silesia during the Seven Years' War. From WIKI

Nadasdy Hussars
Hussar refers to a number of types of light cavalry created in Hungary in the 15th century and used throughout Europe and in Latin America since the 18th century... Frederick II (later called "The Great") recognised the value of hussars as light cavalry and encouraged their recruitment. In 1741 he established a further five regiments, largely from Polish deserters. Three more regiments were raised for Prussian service in 1744 and another in 1758. While the hussars were increasingly drawn from Prussian and other German cavalrymen, they continued to wear the traditional Hungarian uniform, richly decorated with braid and gold trim. Possibly due to a daring and impudent surprise raid on his capital Berlin by the hussars of Hungarian general András Hadik, Frederick also recognized the national characteristics of his Hungarian recruits and in 1759 issued a royal order which warned the Prussian officers never to offend the self-esteem of his hussars with insults and abuses. At the same time he exempted the hussars from the usual disciplinary measures of the Prussian Army: physical punishments including cudgeling. Frederick used his hussars for reconnaissance duties and for surprise attacks against the enemy's flanks and rear. A hussar regiment under the command of Colonel Sigismund Dabasi-Halász won the Battle of Hohenfriedberg at Striegau on May 4, 1745, by attacking the Austrian combat formation on its flank and capturing its entire artillery. From WIKI

I believe this is in reference to hussars under Ferenc Nadasdy, otherwise known as the Black Prince. I couldnt strike up anything much linkable after much digging. Will try again later.

what was about to emerge into the World from the Prussian Plains
See pages 377 & 453.

Ague
I know there is a quick explanation in the book, but for a more detailed explanation, it is the chill you get when you have a fever.

Shawanese
The Shawnee, Shaawanwaki, Shaawanooki and Shaawanowi lenaweeki, are a people native to North America. They originally inhabited the areas of Ohio, Virginia, West Virginia, Western Maryland, Kentucky, Indiana, and Pennsylvania. From WIKI

Transmigration
The idea of transmigration of the soul comes from the ancient Greeks. In transmigration after death, the soul, or shade, drinks from the river Lethe and loses all past memories of their previous life while in Hades, or underworld, and then moves (or transmigrates) into another human form and is reborn. It was thought the soul had been, and always would be, eternal, having no beginning or end. From WIKI

Plato's Tale of Er
The Myth of Er is an eschatological legend that concludes Plato's dialogue known as The Republic (10.614-10.621). The story includes an account of the cosmos and the afterlife that for many centuries greatly influenced religious, philosophical and scientific thought. The story begins as a man named Er dies in battle. When the bodies of those who died in the battle are collected, ten days after his death, Er remains undecomposed. Two days later he revives when on his funeral-pyre and tells of his journey in the afterlife, including an account of reincarnation and the celestial spheres of the astral plane. The tale introduces the idea that moral people are rewarded and immoral people punished after death. From WIKI

Daffy's Elixir
See page 267. Another example of opposites; Dixon is buying a laxative based on alcohol for Mason, to cure constipation, and for himself, a cure for diarrhoea based on opium.

Leadenhall Street
Leadenhall Street is a major street in the City of London. It runs from Cornhill to Aldgate. Aldgate Pump is at the junction with Aldgate. Historically it has been the location of Lloyd's of London and the East India Company. The London Metal Exchange is located at number 56. From WIKI