Sprout Penn
Franklin is refering to John Penn here (see particularly the final sentence below). From WIKI: In 1763, Thomas Penn sent his nephew John Penn back to Pennsylvania to take over the governorship of the colony from Hamilton. The Penns were not displeased with Hamilton, but John Penn was finally prepared to claim a place in family affairs. He took the oath of office as governor—officially "lieutenant governor"—on 31 October 1763. The new governor faced many challenges: Pontiac's Rebellion, the Paxton Boys, border disputes with other colonies, controversy over the taxation of Penn family lands, and the efforts of the Pennsylvania Provincial Assembly, led by Benjamin Franklin, to have the Penn proprietary government replaced with a royal government.

Mr. Allen
Andrew Allen (June 1740 – March 7, 1825) was a lawyer and official from the Province of Pennsylvania. Born into an influential family, Allen initially favored the colonial cause in the American Revolution, and represented Pennsylvania in the Second Continental Congress in 1775 and 1776. Like many other wealthy elites in Pennsylvania, however, he resisted radical change, and became a Loyalist after the Declaration of Independence and the Pennsylvania Constitution of 1776. From WIKI

Milton
John Milton (9 December 1608 – 8 November 1674) was an English poet, author, polemicist and civil servant for the Commonwealth of England. He is best known for his epic poem Paradise Lost and for his treatise condemning censorship, Areopagitica. From WIKI

the tinted lenses of Spectacles of his own Invention
Benjamin Franklin invented bifocals, but he seems to get credit here for also inventing sun glasses.

It is thought that the Chinese were the first to use tinted "sunglasses" to aid in treating conjunctivitis, however, apparently the 17th century is when tinted lenses first became popular. See this LINK for an extremely thorough essay (with photos etc) on the history of glasses.

Godfrey's Cordial
Noisy or demanding babies could be sedated with easily-available alcohol and/or opiates. Godfrey's Cordial—known colloquially as "Mother's Friend", (a syrup containing opium) — was a popular choice, but there were several other similar preparations. Many children died as a result of such dubious practices: "Opium killed far more infants through starvation than directly through overdose." WIKI

Bateman's Drops
The use of invented names began early. In 1726 a patent was also granted to the makers of "Dr. Bateman's Pectoral Drops"; at least on the documents that survive, there was no Dr. Bateman. This was the enterprise of a Benjamin Okell and a group of promoters who owned a warehouse and a print shop to promote the product. From WIKI 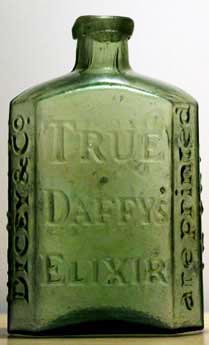 Daffy's Elixir is a name that has been given to several quack medicines over the years. One of the earliest of these elixirs was invented by clergyman Thomas Daffy (? - 1680) in 1647, named elixir salutis (lit. elixir of salvation) and promoted as a generic cure-all. A recipe for "True Daffy" from 1700 lists the following ingredients: aniseed, brandy, cochineal, elecampane, fennel seed, jalap, manna, parsley seed, raisin, rhubarb, saffron, senna and spanish liquorice. Chemical analysis has shown this to be a laxative made mostly from alcohol. From WIKI - Another informative LINK here

one more Station of the Cross to be put up with
Reminds us of Mason's time back on the windy side of St. Helena.

Laudanum
Laudanum, also known as opium tincture or thebaic tincture is an alcoholic herbal preparation containing approximately 10% opium and 1% morphine. It is made by combining ethanol with opium latex or powder. Laudanum contains almost all of the opium alkaloids, including morphine and codeine. A potent narcotic by virtue of its high morphine concentration, laudanum was historically used to treat a variety of ailments, but its principal use was as an analgesic and antitussive. Until the early 20th century, laudanum was sold without a prescription and was a constituent of many patent medicines. From WIKI

Bacchic Leaning
In classical mythology, Dionysus or Dionysos is the god of wine, the inspirer of ritual madness and ecstasy, and a major figure of Greek mythology, and one of the twelve Olympians, among whom Greek mythology treated as a late arrival... He was also known as Bacchus, the name adopted by the Romans and the frenzy he induces, bakkheia. He is the patron deity of agriculture and the theater. He was also known as the Liberator (Eleutherios), freeing one from one's normal self, by madness, ecstasy, or wine. The divine mission of Dionysus was to mingle the music of the aulos and to bring an end to care and worry. Scholars have discussed Dionysus' relationship to the "cult of the souls" and his ability to preside over communication between the living and the dead. From WIKI

quite thoroughly charmed by your Glass Armonica
Having observed glasses played as instruments, Franklin invented his armonica, consisting of a series of glass bowls mounted on a spinning rod; the first performance on the instrument was given by Marianne Davies. Several composers wrote for the instrument, among them Mozart; see [1].

Miss Davies
Marianne Davies (various birth and death years reported) was the first person to publicly perform on the glass harmonica (also known as the armonica). Since her first performance of the glass harmonica was in 1762, her date of birth can be assumed to be at least approximately 1745 or earlier, assuming she performed at age 15 or older. From WIKI

The Beggar's Opera
The Beggar's Opera is a ballad opera in three acts written in 1728 by John Gay. It is one of the watershed plays in Augustan drama and is the only example of the once thriving genre of satirical ballad opera to remain popular today. Ballad operas were satiric musical plays that used some of the conventions of opera, but without recitative. The lyrics of the airs in the piece are set to popular broadsheet ballads, opera arias, church hymns and folk tunes of the time. From WIKI

"Phlogiston and Electric Fir-r-re"
The phlogiston theory, first stated in 1667 by Johann Joachim Becher, is a defunct scientific theory that posited the existence of a fire-like element called "phlogiston" that was contained within combustible bodies, and released during combustion. The theory was an attempt to explain oxidation processes such as combustion and the rusting of metals. From WIKI

Hadley the Quadrant's Eponym
John Hadley (April 16, 1682 Bloomsbury, London; born to Katherine FitzJames and George Hadley – February 14, 1744, East Barnet, Hertfordshire) was an English mathematician, inventor of the octant and precursor to the sextant around 1730. In 1717 he became member ( and later vice-president ) of the Royal Society of London. From WIKI

Dr. Morton
James Douglas, 14th Earl of Morton KT FRS (1702 – 12 October 1768), was a Scottish representative peer who became president of the Royal Society (24 March 1764), and was a distinguished patron of science, and particularly of astronomy. From WIKI

Carpenters Wharf
now covered by Highway 95. Many coffee houses and taverns were there including the famous Tun Tavern which was built by Sam Carpenter, the namesake for the Wharf.

long-rehears'd Claque
A claque is a group paid to arrive and cheer/clap/etc.

the inherent Vice of Glass
The term 'inherent vice' is a legal tenet referring to a "hidden defect (or the very nature) of a good or property which of itself is the cause of (or contributes to) its deterioration, damage, or wastage." Is also the name of Pynchon's seventh novel.

At dawn they are led... they ride all night, and neither sleeps
Some time leakage here - where did the whole day go? However, it would take at least a day and a night to make the trip; the modern route on Highway 95 is 170 miles (273 km), the 18th C coach route would be much longer.

Mount Vernon
Mount Vernon, located near Alexandria, Virginia, was the plantation home of the first President of the United States, George Washington. The mansion is built of wood in neoclassical Georgian architectural style, and the estate is located on the banks of the Potomac River. From WIKI