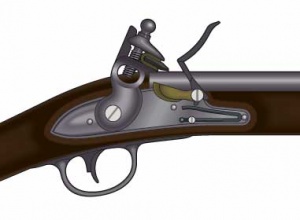 Frizzen and Flint
Rifles, pistols, muskets, fusees, carbines — the one thing that they all have in common is the lock. But how well do each of us know the various parts that comprise this vital piece of machinery?

Perhaps the most common faux pas we make when talking with the public about our weapons is in calling the cock a hammer and the hammer a "frizzen". The cock apparently got its name from its resemblance to a pecking rooster, and only became known as a "hammer" much later in the percussion-cap era. As for the term "frizzen," there simply was no such word in the 18th-century � in fact I could not find "frizzen" listed in ANY dictionary, new or old, including the huge, multi-volume Oxford Dictionary of the English Language. The best guess I have heard so far is that this anachronistic term dates from the late 19th or early 20th-century and is a corruption of the Dutch or Germanic word "frizzel" or "furison", both of which were apparently first used to described the hammer of a flintlock in 1892.

"Frizzen cover" is also an anachronism. Both Simes and Cuthbertson talk of "hammer stalls," being used as a safety device, but there is no mention of frizzens or frizzen covers in either text. The hammer can also be referred to as a "steel," but should never be called a frizzen.