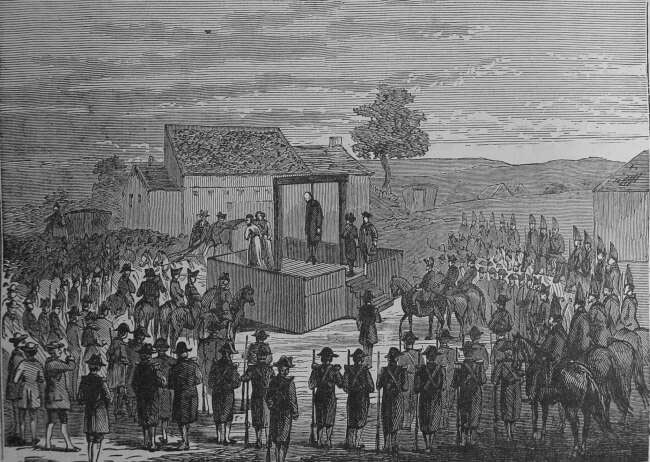 Execution of Lord Ferrers at Tyburn, 1760. Ferrers was convicted of murdering his steward. He is shown hanging from the gibbet, surrounded by soldiers and spectators, with the Middlesex countryside in the background. From Walter Thornbury, Old and New London: A Narrative of Its History, Its People, and Its Places (5 vols, London, 1873-78), vol.5, p.209. Reproduced courtesy of and with thanks to the University of Sheffield.

The execution of Lord Ferrers at Tyburn in 1760. Ferrers was convicted of murdering his steward in a trial in the House of Lords. Tyburn was used as a place of execution up to 1783.

The executions of people convicted in the Gordon Riots in 1780, witnessed by Samuel Rogers:

I recollect seeing a whole cartload of young girls in dresses of various colours on the way to be executed at Tyburn. They had all been condemned for having been concerned in (perhaps for having been spectators of) the burning of some houses ... it was quite horrible.

The reformer Elizabeth Fry saw Elizabeth Fricker hours before she was executed. She wrote about the meeting in her diary (March 1817):

Her hands were cold and covered with something like the sweat preceding death ... There were also six men to be hanged, one of whom has a wife near confinement, also condemned, and seven young children.

A strait waistcoat [straitjacket] could not keep him within bounds: he had just bitten the Turnkey; I saw the man come out with his hand bleeding, as I passed the cell.

The Swiss traveller, Cesar De Saussure, wrote of his experience of viewing an execution at Tyburn in the late 1720s.

Criminals are not executed immediately after their trial, as they are abroad, but are given several days to prepare for death. During that time they may ask for anything that they require either for the soul or for the body. The chaplain of the prison (for there is one) does not leave them, and offers every consolation in his power. The day before the execution those who desire it may receive the sacrament, provided the chaplain thinks that they have sincerely repented and are worthy of it. On the day of execution the condemned prisoners, wearing a sort of white linen shirt over their clothes and a cap on their heads, are tied two together and placed on carts with their backs to the horses' tails. These carts are guarded and surrounded by constables and other police officers on horseback, each armed with a sort of pike. In this way part of the town is crossed and Tyburn, which is a good half-mile from the last suburb, is reached, and here stands the gibbet. One often sees criminals going to their deaths perfectly unconcerned, others so impenitent that they fill themselves full of liquor and mock at those who are repentant. When all the prisoners arrive at their destination they are made to mount on a very wide cart made expressly for the purpose, a cord is passed round their necks and the end fastened to the gibbet, which is not very high. The chaplain who accompanies the condemned men is also on the cart; he makes them pray and sing a few verses of the Psalms. The relatives are permitted to mount the cart and take farewell. When the time is up - that is to say about a quarter of an hour - the chaplain and relations get off the cart, the executioner covers the eyes and faces of the prisoners with their caps, lashes the horses that draw the cart, which slips from under the condemned men's feet, and in this way they remain all hanging together.

You often see friends and relations tugging at the hanging men's feet so that they should die quicker and not suffer. The bodies and clothes of the dead belong to the executioner; relatives must, if they wish for them, buy them from him, and unclaimed bodies are sold to surgeons to be dissected. You see most amusing scenes between the people who do not like the bodies to be cut up and the messengers the surgeons have sent for the bodies; blows are given and returned before they can be got away, and sometimes the populace often come to blows as to who will carry the bought corpses to the parents who are waiting... [1]

Click on a date/time to view the file as it appeared at that time.

The following 2 pages link to this file: