The Defenestration of Prague

The First Defenestration of Prague involved the killing of seven members of the city council by a crowd of radical Czech Hussites on July 30, 1419. Jan Želivský, a Hussite priest at the church of the Virgin Mary of the Snows, led his congregation on a procession through the streets of Prague to the Town Hall - Novoměstská radnice - on Charles Square. The town council members had refused to exchange their Hussite prisoners, and an anti-Hussite threw a rock at one of the protestors. Enraged, the crowd stormed the town hall and threw the council members from the windows onto the spears of the armed congregation below. 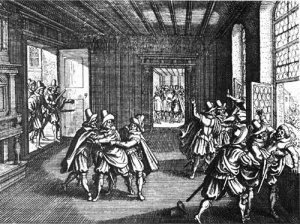 Some members of the Bohemian aristocracy effectively revolted following the 1617 election of Ferdinand (Duke of Styria and a Catholic) as King of Bohemia to succeed the aging Emperor Matthias. In 1617, Roman Catholic officials ordered the cessation of construction of some Protestant chapels on land which the Catholic clergy claimed belonged to them. Protestants, who claimed that it was royal (not Catholic Church) land and thus available for their own use, interpreted this as a violation of the right of freedom of religious expression as granted in the Letter of Majesty issued by Emperor Rudolf II in 1609. They feared that the fiercely Catholic Ferdinand would revoke the Protestant rights altogether once he came to the throne.