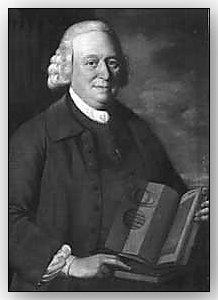 Nevil Maskelyne
Nevil Maskelyne 1732-1811, astronomer royal, was the third son of Edmund Maskelyne of Purton in Wiltshire, by his wife Elizabeth Booth, and was born in London on 6 Oct. 1732. From Westminster School he entered in 1749 Catharine Hall, Cambridge, but migrated to Trinity College, whence he graduated in 1754 as seventh wrangler, taking degrees of M.A., B.D., and D.D. successively in 1757, 1768, and 1777. He was elected a fellow of his college in 1757, and admitted to the Royal Society in 1758. Having been ordained to the curacy of Barnet in Hertfordshire in 1755, he was presented by his nephew, Lord Clive, in 1775 to the living of Shrawardine in Shropshire, and by his college in 1782 to the rectory of North Runcton, Norfolk. The solar eclipse of 25 July made an astronomer of him, as it did of Lalande and Messier; he studied mathematics assiduously, and about 1755 established close relations with Bradley. He learned his methods, and assisted in preparing his table of refractions, first published by Maskelyne in the Nautical Almanac for 1767, the rule upon which it was founded having been already communicated to the Royal Society (Phil. Trans. liv. 265).

Through Bradley's influence he was sent by the Royal Society to observe the transit of Venus of 6 June 1761, in the island of St. Helena. He proposed besides to determine the parallaxes of Sirius and the moon (ib. li. 889, lii. 21), but met disappointment everywhere. The transit was concealed by clouds; a defective mode of suspension rendered his zenith-sector practically useless (ib. liv. 348). An improvement on this point, however, which he was thus led to devise, was soon after universally adopted; and during a stay in the island of ten months he kept tidal records, and determined the altered rate of one of Shelton's clocks (ib. pp. 441, 586). On the voyage out and home he experimented in taking longitudes by lunar distances, and published on his return The British Mariner's Guide,

London, 1763, containing easy precepts for this method, which he was the means of introducing into navigation. Deputed by the board of longitude in 1763 to try Harrison's fourth time-keeper (Observatory, No. 173, p. 122), he went out to Barbados as chaplain to her majesty's ship Louisa, accompanied by Mr. Charles Green. His astronomical observations there were presented to the Royal Society on 20 Dec. 1764 (Phil. Trans. liv. 389).

Maskelyne succeeded Nathaniel Bliss [q.v.] as astronomer royal on 26 Feb. 1765, and promptly obtained the establishment of the Nautical Almanac. The first number — that for 1767 — was issued in 1766, and he continued for forty-five years to superintend its publication. Of the Tables requisite to be used with the Nautical Ephemeris, compiled by him in 1766 for the convenience of seamen, ten thousand copies were at once sold, and they were reprinted in 1781 and 1802. Maskelyne's administration of the Royal Observatory lasted forty-six years, and was marked by several improvements. The observations made were, on his appointment, first declared to be public property, and he procured from the Royal Society a special fund for printing them. They appeared accordingly in four folio volumes, 1776-1811, and were at once made use of abroad, Delambre's solar and Burg's lunar tables being founded upon them in 1806. They numbered about ninety thousand, yet Maskelyne had but one assistant. Their scope was limited to the sun, moon, planets, and thirty-six fundamental stars, formed into a reference catalogue (for 1790) of careful accuracy. The proper motions assigned to them were employed in Herschel's second determination of the solar translation (ib. xcv. 233). Maskelyne perfected in 1772 the method of transit-observation by noting, in tenths of a second, the passages of stars over the five vertical wires of his telescope. He obviated effects of parallax by using a movable eyepiece. In 1772 he had achromatic lenses fitted to Bradley's instruments, and he procured about the same time a forty-six inch telescope, with triple object-glass by Dollond. The value of his later observations was impaired by the growing deformation of Bird's quadrant; and a mural circle, six feet in diameter, which he ordered from Troughton, was only mounted after his death.

Maskelyne published in the Nautical Almanac for 1769 Instructions relative to the Observation of the ensuing Transit of Venus, and observed the phenomenon himself on 3 June at Greenwich with a two-foot Short's reflector (ib. lviii. 233). From observations of it made at Wardhus and Otaheite he deduced a solar parallax of 8·723 (VINCE, Astronomy, i. 398, 1797). He discussed the geodetical data furnished by Charles Mason (1730-1787) [q.v.] and Dixon from Maryland (Phil. Trans. lviii. 323), explained a method of making differential measures in declination and right ascension with Dollond's divided object-glass micrometer (ib. lxi. 536), and facilitated the use of Hadley's quadrant (ib. p. 99). His invention of the prismatic micrometer (ib. lxvii. 799) had been in part anticipated by the Abbé Rochon. The discharge of his onerous task of testing timepieces exposed him to unfair attacks, especially from Mudge and Harrison, against which he defended himself with dignity. In 1772 he proposed to the Royal Society a mode of determining the attraction of mountains by deviations of the plumb-line (ib. lv. 495), and Schiehallion in Perthshire was fixed upon as the subject of experiments, skilfully conducted by Maskelyne from June to October 1774. Their upshot was to give 11Ó×6 as the sum of contrary deflections east and west of the hill, whence Hutton deduced for the earth a mean density of 4x5 (ib. lxviii. 782). The Copley medal was in 1775 awarded to Maskelyne for his curious and laborious observations on the attraction of mountains.

In the dissensions of the Royal Society in 1784 Maskelyne strongly supported Dr. Charles Hutton [q.v.] against the president, Sir Joseph Banks. He advertised astronomers in 1786 of the vainly expected return of the comet of 1532 and 1661 (ib. lxxvi. 426), and discussed in 1787 the relative latitude and longitude of the observatories of Greenwich and Paris (ib. lxxvii. 151). Always attentive to the needs of nautical astronomy, he directed Mason's correction of Mayer's Lunar Tables, and edited the completed work in 1787. His essay on the Equation of Time (ib. liv. 336) was translated in Bernouilli's Recueil pour les astronomes (t. i. 1771); his observations of the transit of 1769 were communicated to the American Philosophical Society at Philadelphia in 1770 (Trans. i. 100, 2nd edit. 1789); he edited in 1792 Taylor's Tables of Logarithms, and in 1806 Earnshaw's Explanations of Time-keepers.

Maskelyne was elected in 1802 one of eight foreign members of the French Institute. Indefatigable in the duties of his office, he died at the observatory on 9 Feb. 1811, aged 79. He married about 1785 Sophia, daughter and co-heir of John Pate Rose of Cotterstock, Northamptonshire, sister of Laetitia, wife of the Rev. Sir George Booth, Bart. Their only child, Margaret (b. 1786), married in 1819 Anthony Mervyn Story, to whom she brought the family estates in Wiltshire, inherited by her father. She showed much ability; she died in 1858. Her son Nevil Story-Maskelyne (b. 1823) was professor of mineralogy at Oxford (1856-95). Maskelyne was of a mild and genial temper and estimable character. Herschel's remark, That is a devil of a fellow! after their first interview in 1782, was probably meant as a compliment (Memoirs of Caroline Herschel, p. 41). His sister Margaret, Lady Clive, survived him until 1817. A portrait of him by Vanderburgh is in the possession of the Royal Society. His manuscripts were after his death consigned to the care of Samuel Vince, F.R.S., but no publication resulted.